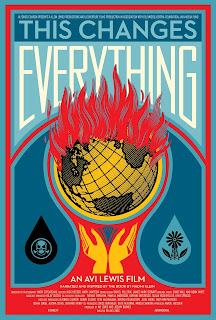 Live at the coal power plant

Yesterday I played with Vince at the prescreening of Avi Lewis' and Naomi Klein's film 'This Changes Everything'. The film (and our performance aswell...) was projected on the power plant which was a spectacular sight. Hundreds of people had come to this weird location in the industrial area outside Amsterdam. I never experienced something like this before, check out the video to get the idea!

Music based upon Naomi Klein's book "This Changes Everything". How did the project start, what is it all about? Take 3 minutes to watch the video and you'll know.

At our last rehearsal we recorded this first version of sacrifice zone. Another song inspired by Naomi Klein's book about climate change.

Have you ever seen pictures of the Alberta tar sands, the German coal mines or, much closer to home: the port of Amsterdam? Amsterdam is home to the largest gasoline port in the world, as well as the second largest coal harbor of Europe. And as if this wasn’t bad enough, the Amsterdam municipal council recently voted almost unanimously to invest over 100 million euros of public money in further expanding the capacity for coal and gasoline shipment in the harbor!

So we dedicate this song to the Amsterdam harbour:

Here is our first recording! The song is called 'The new Movement' - telling an optimistic story about a new global movement against climate change. The lyrics are based upon Naomi Klein's writings, read more..

The Naomi Klein music project is progressing fast. We've been rehearsing a couple of times and started recording some of the ideas. We want to have a demo out within a couple of weeks, so stay tuned!